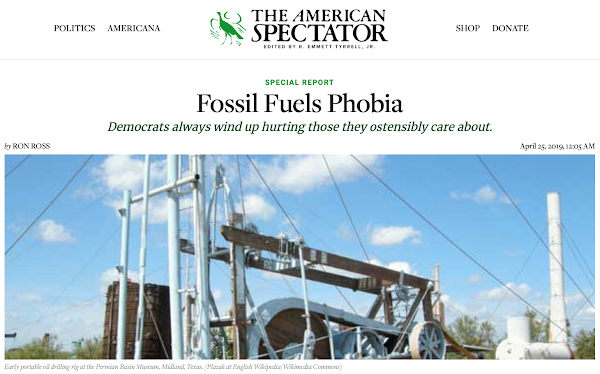 Democrats always wind up hurting those they ostensibly care about.

The Democrat Party’s Green New Deal is nothing but a pipe dream. Its only value is to serve as a reminder of the party’s fossil fuels’ lunacy.

The Democrats protest every attempt to increase the supply and reduce the prices of oil and gas. They fight fracking, pipelines, offshore drilling, and development of ANWR (Arctic National Wildlife Reserve). They have advocated special taxes on fossil fuels (the “carbon tax”), and arbitrary mileage requirements for cars and trucks. Fracking is banned in the entire state of New York. They guilt-trip everyone for their so-called “carbon footprints.”

Fossil fuels provide a wide array of benefits to humans. Those benefits are nothing short of profound — warmth, mobility, illumination, cooking, air-conditioning, just to name a few of the more obvious ones. Fossil fuels are not a minor blessing, they are a gigantic blessing. Without them our living standards would be a fraction of what they are now.

Fossil fuels are the raw materials for a mind-boggling array of products. Natural gas, surprisingly, is the primary ingredient in the production of nitrogen fertilizer, a major factor in “the green revolution.”

Energy is a major cost for businesses and industries. For individuals low oil and gas prices are the equivalents of a pay raise or tax reduction. Democrats claim to be champions of low and middle income groups. Their disdain for the enormous benefits of low prices shows them for the frauds they actually are. Judging by their policies Democrat politicians are economic sadists.

California is an example of what happens when Democrat policies are pursued without opposition. Gasoline prices in the state are typically a dollar per gallon higher than those prevailing in the rest of the U.S.

Another way fossil fuels are a blessing is their sheer abundance. Humans have been enjoying the benefits of fossil fuels for over 200 years and yet the known recoverable reserves are greater than ever before.

Although the physical quantity is no greater than it was at the beginning of that period, our ability to identify and recover what’s there has increased exponentially, basically because human knowledge and technology have increased exponentially. As R.W. Emerson put it, “invention breeds invention.” Amazingly, known reserves are increasing faster than they’re being depleted. The once common concern known as “peak oil” looks silly in hindsight.

The two main factors contributing to the abundance of oil and gas are fracking and horizontal drilling. Fracking makes possible the recovery of oil and gas from shale formations which are common across the globe under both land and sea.

For example, the Permian Basin in southwest Texas is now responsible for a third of all the oil and gas produced in the U.S. Although once a major source of production, it had reached a peak in the early 1970s. With the advent of fracking it is now the world’s most productive oil field, recently surpassing Saudi Arabia’s Ghawar field. A bonus is that oil from the Permian is “sweet” (meaning low sulphur), making it less costly to refine.

Three new pipelines connecting the Permian Basin to the Gulf are scheduled for completion next year. Their combined capacity will be more than 2 million barrels a day.

The abundance of oil within our borders provides us foreign policy flexibility. We can get along just fine without Iranian and Venezuelan oil.

An often underappreciated advantage of fossil fuels is that they are “energy dense.” Solar and wind energy are anything but energy dense because sunlight and wind are not energy dense.

Relying on solar panels to power a thousand homes requires 32 acres of land. Additionally, that land will be taken up for as long as the power is generated. The grotesque solar panels and windmills will be visible for who knows how long. Windmills kill more birds every year than oil spills ever have or ever will.

A major challenge with so-called renewables is storability. The electricity generated by solar and windmills often does not match when it’s needed. Oil, gas, and coal are relatively easy to store and match availability with need. For automobiles, gas tanks are cheaper and last longer than batteries. Filling a gas tank is more time efficient than charging a battery. Time is the scarcest resource.

An oil or gas well requires an opening in the ground approximately one foot in diameter. After the well is completed the drilling rig can be taken away and used again elsewhere. Horizontal drilling reduces the necessary footprint even further by increasing the area reachable from a single well.

Fossil fuels are relatively easy to transport. Oil is a liquid, natural gas is, of course, a gas. Because of those characteristics both can be transported to ports and refineries via pipelines. Pipelines are much cheaper and safer than the alternatives, e.g. trains, ships, and trucks.

Unfortunately, protesters and lawsuit filers do everything in their power to obstruct pipeline construction. Completion of the famous Keystone Pipeline that goes from Canada to the Mississippi River is currently on hold because of one judge’s order. Fortunately, the Trump administration recently submitted a new permit application for the pipeline so it may once again be back on track for completion. Democrats love talking about the need for more investments in “infrastructure,” but anytime it goes from talking to doing they’re missing in action.

So why do Democrats think that fossil fuels are a curse and that we should even cease using them altogether? There is only one reason they offer — the possibility of man-made climate change.

At this point the possible connection between CO2 and climate change is a theory, not a proven fact. The predictions are based entirely on computer models which have been dismal failures in predicting past climate changes. Climate alarmists don’t even offer a clear definition of “climate change.”

Democrats believe that all the benefits we derive from fossil fuels can be derived by developing “alternatives,” the so-called “renewable resources.” Renewable and non-renewable are how they define good and bad. It’s not that simple. In the real world every choice has advantages and disadvantages.

The Democrats’ hostility toward fossil fuels leads them to all kinds of counterproductive policies. Their ethanol mandates result in forty percent of all the land used to grow corn being devoted to ethanol production. Currently that’s over 34 million acres in the U.S. alone. That has the secondary effect of reducing the supply and increasing the prices for food available for humans and other animals, once again exposing the Democrats willingness to punish those they profess to care about.

Ethanol does serious harm to small gasoline engines. (Do not put it in your lawnmower.) Gasoline is oil-based, ethanol is water-based. Mixing them and keeping them mixed is problematic.

Ethanol produces only about two thirds as much energy per gallon as does gasoline. That difference reduces mileage about one to two miles per gallon, ironically at the same time the government is increasing mileage requirements. In light of the abundance of fossil fuels, using farmland to produce energy is a terrible idea.

To deny humanity the enormous blessings of fossil fuels is ridiculous. The Green New Deal proves that the Democrat Party is not serious. The party that was once serious has detached itself from reality.

Ron Ross Ph.D. is a former economics professor and author of The Unbeatable Market. Ron resides in Arcata, California and is a founder of Premier Financial Group, a wealth management firm located in Eureka, California. He is a native of Tulsa, Oklahoma and can be reached at rossecon@gmail.com.
at April 25, 2019
Email ThisBlogThis!Share to TwitterShare to FacebookShare to Pinterest
Labels: American Spectator, Energy, Fuel prices