Will Run for President for Food

Why all these dismal Democrat offerings? 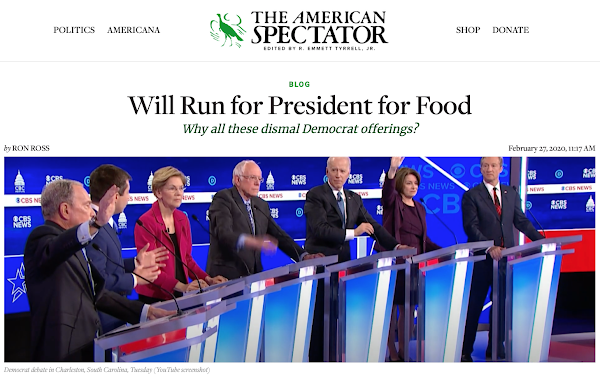 ◼ Will Run for President for Food - Ron Ross.American Spectator

The Democrats’ nomination saga has been pathetic. You may have detected a pattern developing over the many months. In the beginning there were more Democrat presidential candidates than anyone could keep track of. You couldn’t tell the players without a program. They had an embarrassment of riches and were nothing if not diverse — black, brown, white, Asian, male, female, gay, straight. They included both the oldest and youngest presidential candidates in U.S. history. What could possibly go wrong?

Predictably, excitement about each new candidate spiked. Then, inexorably, as their ranks dwindled, hope evaporated. One after another, as more was learned about the candidates, enthusiasm petered out. Now, with bodies of candidates strewn over the battlefield, the lineup’s initial diversity is history.

One by one they have been exposed as empty suits — no real accomplishments, no charisma, no likability.

Even the candidates still in the race have suffered from vetting. To know them is not to love them. They are a pitiful collection of losers.

The 24-hour news cycle pretends the battle still matters. The media have to promote as much drama and suspense as possible. As usual they behave more like fight promoters than reporters.

But no one in the remaining bevy of candidates has a prayer of defeating Donald Trump. Which of them “wins” the nomination makes not the slightest bit of difference. It’s just a question of which one ends up in Trump’s wood chipper.

How many times do the pundits have to be wrong about some loser being a winner? In their monomaniacal quest to unseat Trump, the Democrats have stooped to propping up dead donkeys. Ironically, their monomania is rational. For them the specter of another Trump term is even more horrific than catastrophic climate change. One term has already fried their brains, and another will drive them over the edge, just like Thelma and Louise.

To make matters worse, the Democrats’ monomania has prevented them from promoting what their party stands for. Like nature, politics abhors a vacuum. Into that vacuum have entered people like Alexandria Ocasio-Cortez and Bernie Sanders. The Democrat Party has become pathologically socialist by default.

Meanwhile, the plethora of candidates and debates has befuddled the Democrats. Each successive debate gets uglier. So many debates cause overexposure. The rules about which candidates are eligible change arbitrarily. Democrats are known for falling in and out of love almost instantaneously. They have the attention spans of pubescent Valley girls.

After most of the debates even the mainstream media say that Trump was the real winner. If he wins without even being there, what’s going to happen when he’s there?