The Lure of Predictions

Your guess will be as good as Paul Ehrlich’s, and that's without even trying. 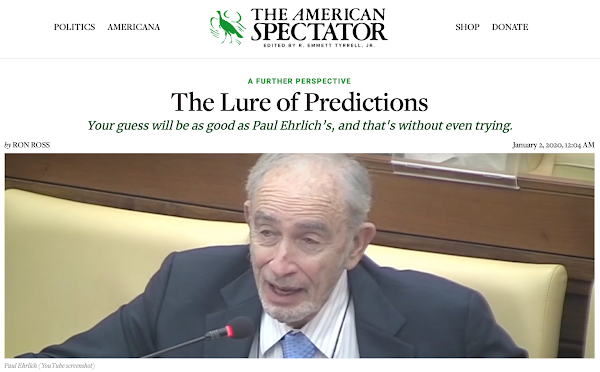 We now commence a new year and a new decade. Such occasions tempt us to make predictions.

Our attitude toward the future is ambiguous and inconsistent. Sometimes we want to know an outcome before it happens. But knowing the outcome of a sporting event takes the fun out of watching it. Absent uncertainty there is no point in running a horse race.

The success rate of a person’s predictions is an indication of that person’s insight and judgment. Consider, for example, predictions about whether or not Donald Trump would win the 2016 election. Three notably correct calls were by Ann Coulter, Scott Adams, and Salena Zito. They each foresaw that he would win when almost everyone else said there was no way that could happen.

Examples of those who got it wrong even up to the very last minute include every commentator and pundit in the mainstream media. Furthermore, they were absolutely certain Trump could not possibly win the presidency. They were all dead certain and dead wrong. None of them have confessed or shown the slightest bit of embarrassment.

In the first act of Shakespeare’s Macbeth, Macbeth and his companion Banquo come upon three witches. One of the witches says, “All hail Macbeth, thou shalt be king hereafter!” Hearing this Banquo says to the witches, “If you can look into the seeds of time and say which grains will grow and which will not, speak then to me.”

Banquo recognized that being able to see the future could be extremely valuable. The manner in which he phrased his question (“If you can…”) indicates he was skeptical of anyone’s ability to predict correctly. He knew that predicting can be a source of power, but that doing so accurately is very difficult.

The witch’s prediction does, of course, come true. Macbeth becomes king of Scotland, but it does not turn out the way he or Lady Macbeth thought it would. In literature, knowing the future is usually a curse, not a blessing.

If it were possible to reliably predict stock prices, you could have all the money you might ever want. Bets on stock prices (i.e., on which stocks will go up faster than the overall market) are wrong as often as they’re right. There are mountains of evidence showing that predictions of stock prices are no more accurate than guesses or throwing darts at a stock listing.

Be suspicious of anyone claiming an ability to “beat the market.” Keep in mind the famous question, “If you’re so smart, why aren’t you rich?” If someone could beat the market he would not be wasting his time hawking his priceless wisdom.

All the concern about catastrophic climate change is prediction-based. The specific method used to derive the predictions is called modeling. The models input many factors that are known to influence the atmosphere and climate, but even the most complex models include only a small fraction of the countless variables that affect the atmosphere and climate. These models supposedly tell us what, for example, global temperatures and sea levels will be several decades in the future.

Climate models are nothing more than computerized wild guesses. They actually have track records worse than wild guesses, and worse than predicting that the future will be roughly the same as the past.

Also, some people have an apocalyptic mindset. There is even a word for it — eschatology: “Of or relating to the end of the world or the events associated with it.” We’re told almost daily that we’ve got only 12 years to change our evil carbon-emitting ways or “the planet is doomed” and half of all species will become extinct.

We don’t know all we need to know about the present. We know even less about the future. But placing faith in models of complex systems is foolish. There has never been one accurate long-range prediction generated by such models.

In perhaps his most famous article Milton Friedman argued that “The ultimate goal of a positive science is the development of a ‘theory’ or ‘hypothesis’ that yields predictions about phenomena not yet observed … the only relevant test of the validity of a hypothesis is the comparison of its predictions with experience.” In other words, the acid test is predictive success.

There are numerous hypotheses that totally fail in regard to predictive success but which continue to be widely popular and influential.

One glaring and long-lived example is Malthusianism. Robert Thomas Malthus’s Essay on Population was first published in 1798. It famously predicted bad times ahead for humanity. He wrote that “Population, when unchecked, increases in a geometrical ratio and subsistence in an arithmetical ratio.” He predicted mass starvation and hunger. The only question was how soon it would happen.

Malthus was perhaps the first to reduce complex reality to a simple formula. His mistake was to underestimate the complexity of reality and overestimate his ability to digest and encapsulate that reality.

People who think they can reliably predict complex systems are people who don’t know their limitations. Malthus was one of a long line of prophets who suffered from a toxic mix of simplemindedness and arrogance. Rarely has anyone been more in error and more influential for a longer time than Malthus.

Nevertheless, the Malthusian mindset is still very much with us. Its most famous proponent is Stanford professor Paul Ehrlich. In his 1968 book, The Population Bomb, Ehrlich wrote, “The battle to feed all of humanity is over. In the 1970s hundreds of millions of people will starve to death in spite of any crash programs embarked upon now. At this late date nothing can prevent a substantial increase in the world death rate.”

But hundreds of millions of people did not starve to death. The “world death rate” decreased and continues its decline. In today’s world obesity is a far greater contributor to premature death[

Paul Ehrlich is just regurgitating Malthus. The fact that Malthus was wrong never penetrates the thinking of fanatics like Ehrlich and his acolytes. You may wonder why anyone so thoroughly disproven still has one iota of believability. He ought to hide his head in shame. Instead he remains a professor at Stanford and continues to be a highly paid public speaker.

Virtually none of the famous predictions of the past were anything close to being objective. Why then did they persist? Heavily corrupted by confirmation bias, as well as by political, social, and psychological biases, they were predictions with a purpose.

Predictions, then and now, are simply biased guesses about the future. Beware of them!

at January 02, 2020
Email ThisBlogThis!Share to TwitterShare to FacebookShare to Pinterest
Labels: American Spectator