Donald Trump’s Art of the Strategy

Why he wins against all haters and comers. 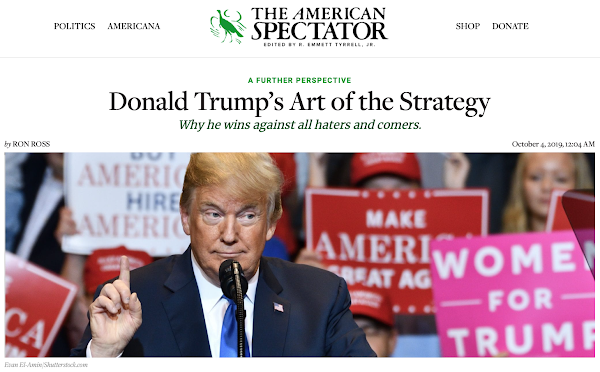 Donald Trump is a master strategist. His opponents are at an enormous disadvantage.

He is relentless. They can’t keep up with him. Every day he does something they deem unacceptable. He keeps them perpetually confused. He has boundless energy. He never backs down.

He takes them so far out of their comfort zone that they have no idea how to get back. They’ve given up trying to understand him. They can’t even understand his humor. They can’t begin to derive effective counter-strategies.

In contrast to Obama, Trump loves his country. He has stimulated a patriotic rebirth. People feel good about their own love of their country, and they love him for making that popular again. Trump makes his followers feel good. The Democrats make their followers feel bad.

Trump gets his opponents to self-destruct. He sets traps for them that should be obvious, but somehow they cannot resist walking right into them.

Trump has hypnotized his opponents. It’s as if he has selected for them the worst imaginable presidential candidates and then tricked those candidates into advocating bizarre policies, policies that are wildly unpopular and will doom any chance they have of winning. Worst of all for them, he has tricked them into being honest about who they are and what they believe.

His opponents’ outlandish behavior doesn’t just happen. Trump is largely responsible for their descent into insanity. It is as though a mole has infiltrated the Democrat Party and set off a neutron bomb, destroying their judgment but leaving their bodies intact.

Trump’s values and objectives have been consistent for decades. He has set records for how many of his campaign promises he has kept, or at least tried hard to keep. The demented Democrats change so often and abruptly that it gives their supporters whiplash.

Unlike the Democrats, Trump entertains people. Even his opponents are unable to look away. His over-the-top rhetoric is irresistible. When the smartest tactic would be to ignore him, nobody can. That allows him to monopolize the news.

Trump’s opponents have been compared to the Road Runner cartoon character Wile E. Coyote. They never learn. How many times have the Democrats promised their acolytes that they had Trump dead to rights? The Democrats’ learning curve has a negative slope. Why they have any credibility left is a mystery.

Trump is emotionally bulletproof. As Victor Davis Hanson has observed, after three years of vicious attacks, the wonder is not merely that he’s still president; it’s that he’s still standing.

Trump’s opponents hate him with a passion. They hate him because he threatens their most cherished obsessions. Before their very eyes they are witnessing the dismemberment of the swamp, climate hysteria, political correctness, economic stagnation, excessive regulations, unlimited abortion, the corrupt media, and illegal immigration. In other words, they hate Donald Trump because his strategies work.
____________________

Ron Ross Ph.D. is a former economics professor and author of The Unbeatable Market. Ron resides in Arcata, California and is a founder of Premier Financial Group, a wealth management firm located in Eureka, California. He is a native of Tulsa, Oklahoma and can be reached at rossecon@gmail.com.
at October 04, 2019
Email ThisBlogThis!Share to TwitterShare to FacebookShare to Pinterest